http://jaevocalproject.weebly.com/yu-junjie.html
Yu Junjie (余俊杰) is a voicebank for the UTAU program. He is the seventh vocal released from JAE VOCAL PROJECT.

Prior to 2014, Yu Junjie was an adopted OC known as "Uno Kenoia". His previous version had few illustrations and an MMD model, neither of which are in use. Initially, Migi considered being Uno's voice provider until he opted for Ume Kenoia (the previous version of Xiao Meihua).[1] Uno was also originally the brother or alter-ego of Ume. This was no longer the case as Meihua and Xiao Shancha became sisters instead.

In 2017, Migi spent time during his college classes in creating character concepts and biographies for the leftover Uno after Meihua and Shancha were long established. He focused on keeping some aspects of Uno's design and personality when designing the new character. On the side, he also tried to come up with several different names. These were "Yu Huiliang", "Yu Congmin", and "Yu Junqiao" respectively. These names were scrapped because they were too feminine or didn't make sense. "Yu Junjie" was later chosen as his given name fit his intelligent personality.[1] Migi also wanted to keep the "brotherly" aspect of Uno's concept. Rather than make him related to the Xiao sisters, he was made to act like an older brother to others in JAE VOCAL PROJECT and has a high sense of responsibility.

Migi considered two candidates for Junjie's voice provider. Providence Polyglot was chosen for the role due to his interest in learning different languages and willingness to participate. In return, he requested that the voicebank could not be used for excessive violence. Later, Junjie's design concepts went through a variety of changes. While Migi initially wanted him to wear more traditional clothing, he also thought it may be too cliché. In addition, compared to the other characters for JAE VOCAL PROJECT, it would also appear too different. He wanted Junjie to fit in with the cast and instead decided that Junjie would have in interest in traditional music, dance, and fashion. MinaKi later created designs for Junjie, including a depiction of him in glasses but was scrapped. After the design was decided, Purpled later drew the final illustration for his default (Mandarin Chinese) design.

Like Shancha, Junjie was meant to be bilingual in Mandarin and Japanese, but the Mandarin voicebank was to be delayed due to development issues.[2] In the meantime, he is expected to release with a Japanese voicebank. On April 5, 2020, it was reconfirmed that Junjie's Mandarin voicebanks are still in development. In the announcement, it was revealed that he and Xiao Shancha were initially going to have CV+VV voicebanks like Meihua, but were scrapped due to the possibility of the banks not working in DeepVocal. Rather, it was decided that both were to use Risku's CVVChinese reclist in order to be usable in both UTAU and DeepVocal. Recording for these vocalists have not yet started at the time.[3]

In July, while talking about possibilities for Meihua and Shancha, Migi restated that Junjie was only releasing with a CV Japanese voicebank and mentioned the cancelled Mandarin voicebank again. While he didn't note any other language possibilities for Junjie, he confirmed that the voice provider is often busy, which influenced the pushback of the new Mandarin bank's development.[4]

Junjie's CV Japanese voicebank was showcased in August. It was confirmed that he would be releasing in November that year.[5] Junjie was released on November 13.[6]

While his biography was written by his creators, it is not strictly canon. Junjie may be depicted in any way as long as his character and software terms of use are not broken.

Junjie is a studious young man with an honest and optimistic outlook on life. He is particularly enthusiastic when answering questions and reciting facts. However, whenever he is wrong, he becomes very embarrassed and silent out of frustration. He is very hardworking to the point where he is considered to be a perfectionist and he may argue that things must be "just right". While Junjie seems to be mature and wise, he is also innocent, gullible, sensitive, and oblivious. Because of this mindset, he is often found doing favors and schoolwork for other people without realizing he is being taken advantage of and believes that he is truly helping them. However, if aware, it is likely that he is doing it to avoid causing trouble for himself and other people.

Junjie does not have any siblings but he tends to be a brother figure to others. He loves traditional outfits and music, and values elegance and gracefulness. However, this does not mean that he is "out of touch" with modern styles. He enjoys the genres and fashion of the present as well. He is also ambidextrous.

He has two familiars: a starling called Bijou and a ghostly cat named Hannelore.

Junjie has an official Mii provided by Migi on the JAE VOCAL PROJECT website.[7] He later received an official twitter account on August 28, 2019. It is used for interaction with fans and roleplaying.[8]

Japanese art with background by Shi-Yin 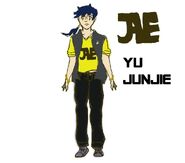 Japanese concept with lineart by MinaKi

Earliest concept and bio by Migi

Retrieved from "https://utau.fandom.com/wiki/Yu_Junjie?oldid=213004"
Community content is available under CC-BY-SA unless otherwise noted.