Xiao Meiye (小梅叶) is a male derivative of the UTAU Xiao Meihua.

In late 2016, a question was asked on Meihua's defunct Facebook page: "If Meihua was male, what would his name be?". One person suggested "Xiao Meiye". This was not revisited again until years later.

In the summer of 2018, preparations for Meihua's 3rd anniversary began. It was decided that a special video would be made to celebrate her release. This video was to be a cover of Aria-P's original Hatsune Miku and Hatsune Mikuo song "Hikari". Because the original featured a gender variant of an existing vocal synth character, it was decided that the cover would do the same, prompting to build upon Meiye's character design.

In August, Purpled completed a headshot of Meiye, which was used as Meihua's Twitter icon in September as an event. Users could interact and talk to Meiye instead of Meihua for the whole month before the account was reverted back to Meihua in October.[1] At this time, a reference sheet for him was produced and was distributed to commissioned artists for the "Hikari" video. Throughout the production process, art and references of Meiye can be seen, but his role was not elaborated.[2]

The "Hikari" cover was uploaded to YouTube, bilibili, Niconico, and SoundCloud on June 3, 2019. Meiye was given his own webpage on the JAE UTAU PROJECT website and his own biography, however, he is treated as an "officially recognized derivative" of Meihua. The group encourages users to create their own interpretations of him if they wish.[3]

On December 21, 2019, Meihua was released on DeepVocal. Meiye could be "created" by adjusting the GEN parameters within the software. He was also given a design.

While his biography was written by his creators, it is not strictly canon. Meiye may be depicted in any way as long as his character and software terms of use are not broken.

Meiye is a shy young man who tends to be distant toward strangers. Whenever he socializes with someone new, he stumbles over his words and blushes often as a combination of bashfulness and embarrassment, and has trouble smiling as it sometimes appears crooked. He enjoys writing notes and reading novels, and while he is not very good at video games, he finds that having fun is more important than winning. Although he denies that he likes romance, his lack of understanding for love leads him to turn to novels and dating sims even though they may not be realistic. He tends to be distracted and become flustered when someone points out that he's forgotten something.

But like his counterpart, sometimes people find him difficult to approach due to his red eyes and stay away from him. He does not react well to others bullying or antagonizing him, and would respond with aggressive or violent actions involving a nailed baseball bat, but would never react in such a way unless provoked. He has difficulty with making new friends as he is well aware of his violent tendencies and is afraid of hurting his friends or frightening them, and this may lead him to be clingy and rather possessive.

He has a pet blood red corn snake named Edna (艾德娜; Àidénà). She is a loyal, precious, and endearing friend to him. Her owner is very willing to protect her and vice versa, and sometimes spoils her like a princess.

He has an official Mii provided by Migi on the JAE VOCAL PROJECT website.[4] He was later given an official Twitter account on August 26, 2019. It is used for interaction with fans and roleplaying.[5] 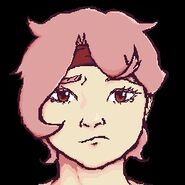 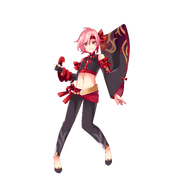 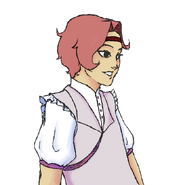 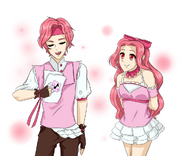 Retrieved from "https://utau.fandom.com/wiki/Xiao_Meiye?oldid=214477"
Community content is available under CC-BY-SA unless otherwise noted.