Uta Utane is the default and first vocal available for UTAU. Uta's voice was derived from the voice synthesis software AquesTalk. Because she is the default voicebank in the standard-issue UTAU installer, she is also known as Defoko (translating to Default (デフォ) Child (子)).

Uta, Teto and Momo were the first 3 UTAUloids to be publicly released, with Uta being the very first. They are often collectively referred to as "The 3 UTAU Girls".

Uta is a Japanese robot with the appearance of a young female humanoid. Her birthday is allegedly February 5, which was the beginning of the UTAU project in 2008. She has a cool and friendly personality, but her alleged bullying towards Momo makes her unpredictable. She appears lonesome and melancholic. Her eyes are usually half opened. 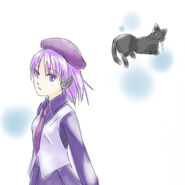 Original Uta artwork made by Ameya