UTAU wiki
Register
Don't have an account?
Sign In
Advertisement
in: Work in Progress, Locked/Sysop, Notable UTAU characters,
and 17 more

Kasane Teto (重音テト (かさねてと)) is a voicebank for the UTAU program.

Combined with Uta Utane and Momo Momone, they are often referred to as "The 3 UTAU Girls." This is due to the fact that they were the first 3 UTAUloids to be publicly released.

She appears in the Hatsune Mix manga by KEI. She is shown on two bottles of MEIKO's sake: one labeled "重音てと" (Kasane Teto), another labeled with her name in default Katakana, "重音テト"; she appears with Yowane Haku in another chapter. And on October 10, 2011 Teto made an official appearance in Project DIVA.

Depicted as more innocent than Miku Hatsune is. Teto is cheerful and eager, though may be naughty at times, perhaps inspired by her mischievous roots from Doraemon. Depicted also as a Tsundere (a mannerism that feigns disinterest to people she is attracted to), but to a more gentler extent, unlike Neru Akita. She hates people who think her pigtails are actually drills. She also can be narcissistic at times and loves getting attention. She gets very angry or sad if someone has bread and does not share with her. Teto enjoys teasing people just to show she cares about them since she doesn't want to show her love. She can get out of control if not eaten bread for one day. There are also persisting rumors of Teto's Chimera alter-ego, giving her wings and a tail. She may or not be aware of her own Chimera form. As for her other skills, she can whip up tricks to extend DVD rentals, and her favorite country is Norway.

Teto's voicebank has seen revisions; first, the original release, the second being teto-02, and a new version, teto-03 alpha. Ameya, the author of UTAU, is reportedly involved in the tuning of Teto's voicebank, and teto-03 alpha is seeing regular use due to the improved quality over the previous versions. However, it is still in Kana, but experiments for non-Japanese vocalizations has seen some better potential for English.

Later, Kasane Teto's VB had gone onto her official site. Since that, two packages had been released: the "Tougou full, CV/VCV" and the "Tandoku lite, CV only" version. These two versions are seen updates regularly.

Crypton Future Media now accepts Teto's illustrations on Piapro. To clear up the issues related to copyright, users are encouraged to post the illustrations onto the site (need to create your account), and Piapro and TWIN DRILL, the official association of Teto, give approval to the NON-COMMERCIAL use of these creations automatically when uploaded. To utilize this arrangement, users need to link the posts to the main illustration here. The procedure is as follows: Click "創作ツリー" and a new window opens; paste the URL of the main illustration in the box "元になった作品のピアプロURLを追加して下さい。", then click "親作品を追加する". 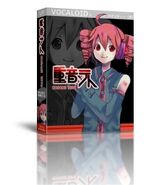