UTAU wiki
Register
Don't have an account?
Sign In
Advertisement
in: Locked/Semi, Work in Progress, Notable UTAU characters,
and 16 more

Tei was developed by 2ch denizens to be another troll VOCALOID, in a similar fashion to Kasane Teto, who was released without a voice. However, Tei was unique in the fact that her voicebank was developed. She has successfully lured many into believing she was an actual VOCALOID, leading the VIPPERS to success once again.

Because of her status as being made by VIPPERs, she was born with a degree of hatred already, being used to deceive people. However, because of her 'unoriginal design', and yandere personality (her obsession with Len and hatred of Miku has startled and angered fangirls, along with her similarity to many "poorly"-designed VOCALOID fan-made characters and UTAUloids), she already has a large following among trolls for her amazing ability to make people immensely angry.

She is also a parody of how most UTAUloids or general fandom design characters; her sharingan is a jab at many Naruto fanfics/oc's who design their characters with sharingans, a power exclusive to the Uchiha clan; her "unoriginal" voice is a jab at many Fanmade VOCALOIDs often based from Miku; and her sailor fuku design is also a jab at how most UTAUloids mimick parts of Rin's design.

She should not be mistaken as a relative or anyone related to Suika Sukune or Tei Shizuka.

Tei is introduced as a yandere, someone who appears to be loving, but can get very violent for whatever reason; In her case, she'll be violent because of someone touching Len (her crush). She is always trying to kill Miku in order to take over the leading VOCALOID/UTAUloid status. She despises the VOCALOIDs with a passion, and has an odd fetish for traffic lights. She's not ashamed to masturbate in public if the urge rises. As for her normal traits, she likes baking a cake. Her anger leads to the deployment the Public Security Operation (Police Operation) of JSDF to subdue her.

Student in Waseda University, School of Fundamental Science and Engineering.

Sukone Tei has a governing policy imposed by the author in regards to usage of both the voicebank and the character.
DISCLAIMER: This is an unofficial translation for user help. Any questions arising shall be settled by the original Japanese text given here. UTAU wiki shall not be responsible for the accuracy and reliability of this translation, and shall not hold any responsibility to consequences using this material.

1. Authorization
Users shall be deemed to have read and agreed to the paragraphs and the articles below when utilizing Tei Sukone (or Sukottei).

3. Prohibitions and Reminders
a) Political expression

Is not limited. However, the utilization which violates usage rule above is forbidden.

Religious expression which promotes a certain religious group is forbidden.

Is not limited as long as a cautional statements and tags are written properly.

Do not post Tei Sukone and the works using Tei Sukone onto PIAPRO. (PIAPRO is for Vocaloids which are distributed by and the derivative characters approved by Crypton only.)
The author(s) does not hold any responsibility to incidents caused by violating this prohibition.

4. Modification and Redistribution of the Voicebank 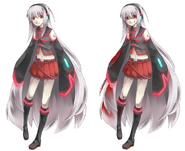