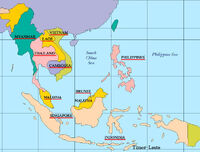 Kenta is a □CALOID by ɹɔʎpton (both spoofs), but wasn't made as a joke. He is regarded as the first UTAUloid to have been voiced and designed by a Filipino.

Karahi Surahe (すらへカラヒ) Not much is known of this UTAU other than her/his name. The picture on the right probably has nothing to do with the said UTAU.

The nice and friendly UTAUloid of the Philippines.

A shinigami UTAUloid who carries her scythe wherever she goes. She stabs people who mistake her for a boy.

She appeared secretly as one of the many UTAUloids that exist today.

He is from the Future and went to the Present time plain to meet his long lost big brother. His shota appearance is only the side effect of traveling through time but in the future, he is 22 year old.

An utauloid that is designed to be of any gender.

He is known for his Screaming Voice and loves solving Sudoku puzzles.

An UTAUloid that can reach any vocal range. Will kill for chocolate.

Wakana Ayane (綾音和奏) A bit of a recluse, hot-tempered and a stubborn tomboy. Can be arrogant over her pride and strength but still be caring towards people she cares.

Harley (ハーレー) A loopy five-year-old UTAUloid that can turn into a puddle of goop and turns his hands into weapons.

Nami Utaune (歌う音ナミ) Nami is very childish, kind and straight. She's very friendly towards her friends and would try to stand up for them and help those who are in trouble.

She has a gentle and feminine voice. It is suggested to use flags to achieve the "feminine and cute" voice. She has an OC backstory which will not be explained as it is too complex. Today, she is the top ranked Shinigami existing.

He has a voice Specialized for Jazz and he has a voice close to Len's voice (with the right flags) he is a Jazz singer existing.

He based on Michael Jackson which the author is the big fan of. His romaji-syllabled voice used for public. Voiced by a Indonesian woman, but a little bit baritone look-alike.

Retrieved from "https://utau.fandom.com/wiki/Southeast_Asia?oldid=193748"
Community content is available under CC-BY-SA unless otherwise noted.