https://utau.fandom.com
Souma Kagyakune (加虐音颯真) has two CVVC voicebanks for the UTAU program, only one is current and distributed.

Souma's ACT 1 was released on January 7, 2017. He was recorded on a Japanese CVVC reclist, but was configured as a psuedo-VCV as Grayslate had no idea how to oto CVVC.

Souma's ACT 2 was recorded in 2018, and the otoing process was handed off to SunGuardian when GraySlate commissioned them to. He was released publicly on August 29, 2018.

Souma is a Japanese orphan who lost his parents in a house fire when he was 4 years old. He was taken to the closest orphanage in New Orleans, and was cared for by a woman named Carla Kassamali. Under her care, he learned many things about Voodoo, and her knowledge was passed onto him. He devoted his life to the practice, and became a prodigy at a young age. He developed a taste for swing and big band jazz, and singing became a hobby for him as well. When Souma was working age, he set up his own shop downtown selling his services for the curious people of New Orleans. He now is recognized as one of the last remaining Voodoo Kings in New Orleans, and people often come to him for advice. Despite being a well known figure, he has his hecklers too, mostly from the Catholic church and Christian white moms in the area. He keeps his head up and thrives in the city he calls home, and lives to entertain the masses.

Dislikes: Making things complicated, when his friends call him out

Souma's voicebank is and will always be free for usage in the UTAU program.

A few people have used Souma, but it's hoped that more people use him. He has had a much more positive reception in his current state.

Souma's bank is in zip format.

Souma for his The Distortionist cover

Souma for his demo reel video 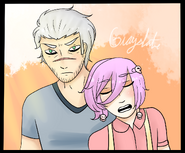 Souma and his boyfriend, Winter (property of soopjoy on Instagram)