Angel Seraphina (セラフィナエンジェル) is a voicebank for the UTAU program.

"It was a rainy day in 2013 and the power went out. I was left with nothing to do but draw so I drew a simple girl. From there, ideas started to spark and soon would emerge Angel's first ever design. From there, I just kept redesigning her until I came up with the current design (image on the right)."

Angel was released as an initial design back in September 24, 2017 on Deviantart and was given an official fanloid voice by S1ND3R3 on May 16, 2018. The voice was an XSY of Akari and Iroha Soft (A link to a sample of Angel's fanloid voice can be found here).

As of the current time, updates to her voicebanks are still being made and multiple versions of Angel's voicebank are planned to be released within the year by the creator.

Angel's Surname "Seraphina" is a Hebrew name meaning "Fiery-winged".The name "Seraphina" was influenced by the word Seraph, a noun with the definition being an angelic being associated with light, ardor, and purity. Her first name, "Angel" was inspired by her surname. The first few ideas for her name were either "Angela" or "Angelica" until the creator finally settled with "Angel".

She has stylized, gentle looking eyes with her eye color being a hue close to seafoam green. She has long pastel pink hair that curls on the tips. She usually has her hair in a ponytail held up by a red silk ribbon. Her bangs are side-swept with some of her hair hanging at the sides of her face reaching just below her shoulders. Her skin is noted to be fairly rosy with certain parts blushed such as the face, shoulders, thighs, knees and stomach.

Her clothes were inspired by GUMI's design but in a simpler manner. She wears a white sleeveless high-cut top with a red silk ribbon tied around the collar along with a cropped black undershirt and skin-tight sport shorts. She wears long white gloves that reach just above her elbows. Her frilled skirt is black with a red belt and she wears pale brown knee high boots.

She is essentially sweet and cheerful but can also become overly sassy when the time is right. She gives her all when expressing love to her friends and tries her best to make anyone and everyone feel accepted. However, this trait can be taken advantage of as she is often too blinded by love to sense when a person who she thinks is a friend is hurting her. In the case where she realizes someone is hurting her (or a friend) her sweet personality switches completely and she becomes incredibly cold and sassy. She is overall a very sweet person and can become friends with anyone. Her personality type can be classified as a deredere. 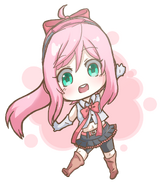 The art used in Angel's cover of Interviewer 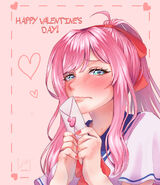 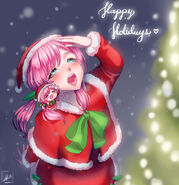 Retrieved from "https://utau.fandom.com/wiki/Seraphina_Angel?oldid=207466"
Community content is available under CC-BY-SA unless otherwise noted.