Ser0 is a voicebank for the UTAU program. She is the second character released from JAE VOCAL PROJECT.

During 2014, Purpled, Migi, TraInspud, and Mina Moonrise were working on their own UTAU projects. At the time, Purpled was working on an UTAU known as "Rachel". Rachel was capable of singing in Japanese and was recorded using Purpled's father's iPod. There were other concepts aside from her, but she was the first one taken up as a serious project as Purpled planned to release her.[1][2] Rachel was later scrapped. Instead, she worked on a new character and voicebank known as "Ser" or "Ser0". Ser0 was given an entirely different tone of voice and design. Purpled later notes that Rachel was the closest thing to being Ser0's predecessor.[3]

Through 2016, after the release of Xiao Meihua, production shifted focus to Ser0. Her and JD's productions were hinted to the public through Meihua's Facebook page on May 6, 2016.[4] After learning about English CVVC within UTAU, Purpled was inspired to create her own custom reclist. One of Purpled's focuses was the creation of something more compact and the desire to add less.[5] She aimed to make a small voicebank with multipitch and multitone capabilities so it wouldn't be taxing to the UTAU program. Ser0 is the first UTAU to use this reclist.[6] She initially had three different voicebanks before she was released with only one.[7] The final reclist was built for English, but also supported Spanish.

Ser0 was released on January 1, 2017. Afterwards, there was a desire to list the group's UTAUs under one name. On January 9, 2018, an official website was launched and listed Ser0 and Meihua under the JAE UTAU PROJECT. Ser0 was labeled as JAE-02 respectively. It was later confirmed that Ser0's initial voicebank was an incomplete product, but the results were something that Purpled was proud of.[8]

Ser0 was expected to receive DeepVocal voicebanks along with UTAU.[9] However, in February 2021, it was announced that Purpled departed from JAE VOCAL PROJECT, resulting in any development plans for Ser0 to be cancelled. This included her DeepVocal voicebank. Even though Ser0 would no longer be receiving any new voicebanks, she was still part of the group and she would still be promoted via songs and merchandise. Her voicebank was still made available.[10]

Ser0 is a mischievous character.

Official merchandise can be found on the JAE VOCAL PROJECT Storenvy and Redbubble.[11][12] Storenvy was later replaced with Ko-Fi due to technical difficulties.[13]

Third party works, such as an MMD model by OSformula[14] and a Lipsync model by PRISMkidd, have been made available.[15]

She has an official Mii provided by Migi on the JAE VOCAL PROJECT website.[16] 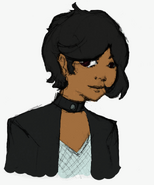 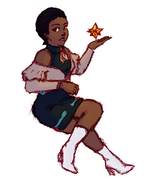