https://utau.fandom.com
Samara (サマラ) has had two English voicebanks for the UTAU program, only one is current and distributed.

Samara's first voicebank was released on January 7, 2017. The voicebank was encoded/aliased on Cdra's CVVC English reclist and was very low quality. There were many oto, recording, and frq errors that made the bank overall unusable.

Samara's second bank was released on July 9, 2018. She was encoded/aliased on Cz's VCCV reclist. The bank was a much better product, but still had many errors due to being rushed out.

On June 22, 2019, Samara was re-released, fixing the entire bank and correcting oto and frq errors.

Samara is a Satori that appears in a cursed video. The twist with her is that the video she's in doesn't kill you seven days after viewing it; in fact, she doesn't kill at all. Rather, she shows scary clips until she gets bored or hungry, and asks the person watching for their food. Samara also practices magic and illusions outside of the TV, and carries everything she needs for it and all her valuables in her suitcase. Despite having to fill the role of a cursed entity, she's very happy and upbeat, and easily makes friends with those that see her video, doubly if they have food.

Samara's voicebank is and will always be free for usage in the UTAU program.

It's unknown how many people have used Samara, but it's hoped that more people use her. She has had a much more positive reception in her current state.

Samara's bank is in zip format.

Samara's Art for her We Are Number One cover by GraySlate

Samara's art for her Happy Day's cover by GraySlate 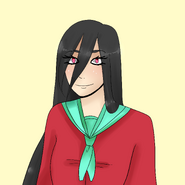 Samara's Icon by GraySlate
Add a photo to this gallery

Retrieved from "https://utau.fandom.com/wiki/Samara_(サマラ)?oldid=204117"
Community content is available under CC-BY-SA unless otherwise noted.