SAiFA was announced on October 10th 2018 as UTAU voicebank named Saifa Jun. Later she was frozen as a project and later, in the middle of 2019, work on her was continued.

She is android. SAiFA appears to be calm and serious most of the time, but she also likes happiness and to joke around too. She is very curious and likes people very much, even if she doesn't know much about them, because of that she is very naive.

Note: it's better to contact SAiFA's owner for getting any of these voicebanks.

All the samples are on the official site.

All the provisions below shall be applied to the voicebank, SAiFA. 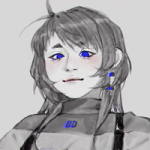