I use Rizumu more than just a voice synthesized character. He is used for a whole bunch of things in my world. He's the Knight of Harmony in the R.Wian Army. He's the newest member. Rizumu usually has a hard time trying to fight since I already stated that Rizumu is cowardice. So he usually has to be trained extra by the R.Wian King.

Relationship with his Creator
Both Merodi and Rizumu have the same creator. Like Merodi, Rizumu doesn't call his creator "Master." She doesn't like going by that name. Instead she prefers her actual name. She treats both of them as human beings with feelings and rights. In R.W, Rizumu is in the R.Wian Army so he actually has a job. Rizumu also has a strong connection with the R.Wian King, also the Creator's brother. He treats Rizumu with the upmost respect as Rizumu does to him.

Rizumu is a Cyborg man that is cowardice and shy, but once he opens up, he's a very nice individual. He had a low self-esteem due to him being cowardice but he always thought he can do better. He tries his best with tasks and is persistent. He is very helpful to his friends and loves sweets. He loves to sing and dance and is his and Merodi's Manager for concerts. He also has a job as a soldier in the army. Atir Leader, the King of R.W, recruited Rizumu and at first, Rizumu was scared since he had no combat skills and was afraid the other knights would make fun of him. But he got used to it and had formed strong bonds with the other knights. He deeply is thankful for Atir for being his teacher and bringing him into a new circle of people. He met his best friend, Caulter Northside there as well.

Rizumu is very much a himbo, since he kind of has "selective knowledge" on some things. He can be pretty forgetful and a little airheaded since his AI learned pretty slowly, but he knows a lot about music and combat thanks to himself working hard and from Atir teaching him everything about combat. He was a pretty good student at UBMA and continues to advance with help from his antenna on the side of his head.

Rizumu's design is a bit more complex. He has a curl on the left side of his head resembling a Bass Clef.

Rizumu has a so called Voice Stone because since his voice is made from a female voice, he has a stone to help him sing. For his appends, he has different voice stones and headphones.

Rizumu Teion first originated as a simple WAV file on a computer known as Clippy, a windows laptop. The computer began to pick up sounds from hearing the owner's voice. The collecting of samples began to form an artificial voice for the developing AI. This AI began to develop rapidly that it was becoming too powerful for the computer to handle. It wasn't just this one AI but another was also rapidly developing. The owner sensed something wrong with their laptop so they reached out to an organization to help fix it. These AIs were thought to be viruses due to the source of these AIs forming from a musical program having to do with artificial voice.

Instead of destroying the AIs, a separate and private organization reached out to the owner and offered to do something with the AIs. They offered to extract the AIs from the laptop and give them "bodies of their own." This caught the owner's attention. The organization needed to know what these "bodies" will look like so the owner created designs for both AIs. Both a male and female body since one AI sounded masculine and the other sounded feminine. When the company got the laptop and the references, they began to create android vessels for both. Two bodies were made for the male body.

Rizumu is mostly involved with his Army friends and his girlfriend, but he still has outsider friends that are not part of R.W. NOTE: These relations are friendship relations and these UTAUs mentioned are within my friend group.

Steve Windows: A shy and quiet friend that Rizumu helps cheer up. Steve usually is depressed because he is an old windows system that is considered obsolete. However, Rizumu helps him and can communicate to him through binary code. Rizumu trusts Steve since he is a loyal friend to another friend, Ne Schwarz. Rizumu usually helps Steve with maintenance when Steve's motherboard gets dusty or when something is lodged in it. Rizumu cares for Steve very much like a little brother, despite Steve being a decade older than him. Either way, Rizumu cherishes Steve no matter what.

Ne Schwarz : Fellow Knight of R.W (AU) and friend. Rizumu guides her and helps her assimilate into the army. She tends to be cold, but Rizumu knows her true intentions and is confident in her to make it in the Army.

Rakko Usukko:Another fellow UTAU friend to Rizumu but can cause him some annoyance, but he's fine with Rakko blasting his music when he's trying to sleep. Rakko means well to Rizumu, though.

S.A.M Intel: A Computer Android that Rizumu was terrfied of at first, but has warmed up to them. He certainly has care for Sam and admires them for their bravery and their protectiveness.

Ongaku Fukitsuma: Rizumu's Adopted "Younger Brother" despite Ongaku being 549. Though Rizumu really values Ongaku as a father figure although there are sometimes when Ongaku is somewhat scared of him. It's a weird relation but positive one.

Arachne: Fellow arachnophobe. A chaotic lesbian girl that Rizumu admires for her fashion. Her pastel colors and designs always bring Rizumu inspiration. He believes Arachne's voice is lovely. He hopes she will gain a lot of success.

Gabriel: Fellow himbo friend that Rizumu can share a few braincells with. Their love for sweets and hatred for bugs puts them on a wavelength. Rizumu would love to talk to Gabe any chance he gets to become better friends.

Yukine Ketsueki: A demon prince that Rizumu admires for his bravery and perseverance throughout his life. Rizumu finds him delightful to be around. Though might be a tad scared of.

Teion Yumemi: Long lost, sister, eh not really. But fellow Teion associate that Rizumu is pleased to work with.

All the provisions below shall be applied to the voicebank, Rizumu Teion.

Rizumu was created a month after Merodi. I decided that Merodi should have a friend of the opposite gender. She wouldn't be the UTAUloid she is today without him.

Rizumu doesn't like bugs, especially spiders. The reason for not liking big dogs is that he's afraid of them jumping on him or possibly attacking him. Rizumu has a hard time fighting big dogs because dogs are domestic animals that can be trained to be companions. Rizumu would never want to hurt domestic animals. He hates the legs of spiders because they are hairy and feel weird to him. He would hate it crawling on him.

Rizumu is a cyborg so he has robotic parts inside him. One of his lungs is mechanical so he uses that lung to sing long and high notes. The other lung is a normal lung. Rizumu's brain is separated into two main parts. His humane side and his robotic side. In his humane side, that controls Rizumu's behavior, speech, memories, and interactions like a normal brain. Thus, Rizumu can function like a normal human. The robotic side is Rizumu's UTAUloid Data. It holds the OTO Samples and brainwaves to Rizumu's waist gear (Append Whisper form) or voice stone. It also holds Rizumu's technical information and how he's programmed. So basically Rizumu has two brains in one. Even a few of his bones are mechanical. Also Rizumu's heart is half human half mechanical. Merodi is structured the same.

Rizumu never was a perfect character. He has flaws. First, he is very cowardice and gets scared easily. Second, he got that way because of emotional scarring as a child. And Third, Rizumu has panic attacks. That happens when he's in a high period of stress or if he's really scared to the point where he can't handle it. Usually Merodi is the one to help Rizumu when he has a panic attack.

Since Rizumu was given Combat Mode, he has access to new weapons and features that are functional from his own vital signs. Rizumu has the power to summon large USB cords with spikes and electrically charged prongs on the end of them. They are known as USB Impale and USB electrocute. USB Impale is a large blue cord with a spike and USB Electrocute is a tealish green cord with two electrically charged prongs. These are serve as long rage attacks. Rizumu also was given a sword called the Power Needle. A neon power symbol with a elongated point. This is Rizumu's new character item. Rizumu's eyes are different when in combat mode to distinguish from his normal eyes. They are darker and redder in Combat Mode and the music notes in his eyes disappear.

Rizumu is the only Knight with a tattoo (50 on his arm) and piercings.(black ear studs)

Rizumu is a Kaito inspired UTAU.

Rizumu was coined as a himbo by friends and classmates. 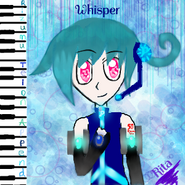 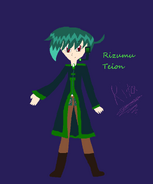