Reicheru Nintone was released on October 4, 2011 as a CV voicebank under the name "Reicheru Hoshikone". She later received a 2.0 CV update and a VCV 1.0 voicebank. At this point, she was renamed as "Reicheru Nintone". For these voicebanks, she was voiced by Kirrin.

In late 2018, Reicheru received a brand new voicebank known as "Reicheru Nintone Switch". This voicebank was confirmed to be voiced by StarGamer01, the manager and creator of Reicheru herself. This was the first time StarGamer01 voiced an UTAU and future voicebanks for Reicheru sample from her.

On September 5, 2019, a teaser for her updated design was revealed along with the announcement of her newest voicebank: Ultimate.[1] On October 5, 2019, it was announced that Reicheru would be receiving an English voicebank. This is expected to release later that year in the winter season.[2]

It should be noted that the character traits are not strictly limited to the creator's ideas. Free interpretations are encouraged.

According to the official website, Reicheru Nintone was designed to reflect StarGamer01's love for video games (especially Nintendo). She is outgoing and amiable, but may sometimes be seen as obnoxious. She has a strong love for video games to the point that her career basically revolves around it. While others may note this as an "unhealthy video game addiction", she sees it as a "very passionate hobby".

In the read.me of her Switch voicebank, it was noted that during tough times, Reicheru turns to playing video games to feel better.

In 2019, her profile was updated. It was noted that she is optimistic and enjoys relaxing on rainy days. Her most prominent trait is her easygoing and bright demeanor. She has a very strong passion for Nintendo and has a wide array of merchandise and knowledge of the franchise. This is what had inspired her to sing in the first place.

She has special powers that are based on Nintendo's "EarthBound", but unlike the protagonists, she uses them for more mundane tasks. This ranges from flying rather than walking, picking up faraway objects, or using her powers for visual appeal.

Her hair has the ability to respond to her emotions. Under high stress, it may glow and float.[3] In addition, depending on her state and environment, her psychic abilities would change her physical state. The irises of her eyes can change shape.[4]

The official website has MMD models listed. These were made by kitzabitza and A-Daiya respectively. 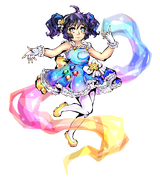 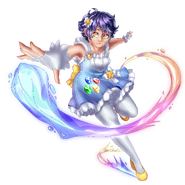 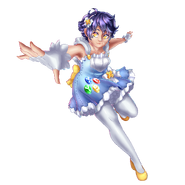 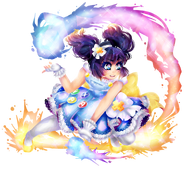 "DLC designs" based on Nintendo characters by StarGamer01

Retrieved from "https://utau.fandom.com/wiki/Reicheru_Nintone?oldid=203959"
Community content is available under CC-BY-SA unless otherwise noted.