PAG.AW was created in April 2019. They are not officially released, as they do not have a proper design aside from concept art. Their main voicebank is completed at it's core and free to download but going through refinements.

Their gender-appends, PAGNE and RENCE are expected to be officially released alongside PAG.AW around late 2019.

They are a young, sickly kid who is needlessly brash. They have a soft tone of voice but a harsh tongue. They are easily excited - though it may not show on their face - and is always ready to cause trouble.

They like collecting charms of any style. They also have a penchant for coding.

As PAGNE, they are a sweet, bubbly girl who doesn't hide what she feels.

As RENCE, they are a stubborn, clueless boy who runs his mouth.

All art in this gallery is created by the VB's creator, H0NE-Y unless stated otherwise. 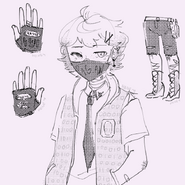 Retrieved from "https://utau.fandom.com/wiki/PAG.AW?oldid=201130"
Community content is available under CC-BY-SA unless otherwise noted.