An UTAU started in approximately the year 2014. Originally just for fun, poorly made, and nothing much was laid out for the character at all.

Over time, the UTAUloid has been through a lot of work. At first, there was no name, and then there was one, which ended up being changed later on from "クミ" to "ナホ" around the year 2018. The character has been through countless drafts for an official design. It also dealt with a very low-quality voicebank, and a butchered, yet manageable MMD model, both of which happened before 2018 and are no longer available.

The first song Yumene was able to cover was likely "Meltdown", originally performed by Kagamine Rin.

Naho is a student at a music academy. She does commercial modeling jobs on the side, and her hobbies include napping due to her lower energy levels, and she also enjoys playing a Dizi flute. Aside from going to school, she is most often seen relaxing in more solemn places, perhaps drawing or writing music and thinking to herself.

Naho is definitely more on the Deredere side of things, but she is also more introverted, showing a bit of Dandere, because she usually isn't the one to initiate social interaction and doesn't speak often in group conversations.

Naho is 30% Taiwanese, 29% Japanese, 15% Korean, 14% Russian, and 12% French. Her most notable facial features are her nose and eyes. Regarding the oddity of her weight (4.5 kg/10 lbs), Naho was born from a dream; her physical weight is nearly nonexistent. Due to the infinite connections between reality and dreams, Naho weighs more than absolutely nothing, allowing users to maintain their connections with dreams through her physical being. Her footsteps are extremely quiet, allowing her to go places without being noticed.

Naho is NIZIE's closest friend since childhood. Although they don't hang out every day due to their busy schedules, between the social lives of both of them, they can be seen with each other most often as opposed to being with others.

Naho admires the voice of Namine Ritsu. Despite that admiration, she desires to stay as far away from Namine as possible when not performing with him.

Naho also admires the sweetness and voice of Renri Yamine, and the voice of Gahata Meiji, although the believes that Meiji is a very conceited person.

Naho likes the new Vocaloid Matcha because she likes matcha-flavored things (She also loves her voice in the DEMO video for her voicebank).

Mawarine Shuu is admired by Naho for his powerful vocal abilities.

"AWAKE" Is likely what is considered normal in the UTAU database. With Naho's dream theme, naming the "normal" voicebank "AWAKE" has maintained the dream aesthetic and theme. CV AWAKE is a tri-pitch voicebank. Not all of the notes are oto'd in this bank, but most songs can still be produced without the missing oto'd notes. However, the user can still use them by putting their oto skills to the test.

CV AWAKE v2 has been started. NIZIE's v1 voicebank will be completed before work will continue on AWAKE v2. AWAKE v2 will be recorded with an XLR microphone and an interface, will maintain better character within the voice, and will have more consistent velocity rates. The number of pitches is not yet determined.

Years before 2019, Naho was without a name but got her first voicebank. This voicebank sounded very choppy and unnatural. This old voicebank is not available.

There are future plans for a VCV. CV AWAKE v2 will be completed first.

In the far past, Naho has had 2 VCV voicebanks that were likely unfinished. Samples have vanished from the old YouTube channel.

All the provisions below shall be applied to the voicebank and the character, Yumene Naho. 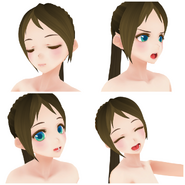 Retrieved from "https://utau.fandom.com/wiki/Naho_Yumene?oldid=209905"
Community content is available under CC-BY-SA unless otherwise noted.