TETOFES was a concert that took place on October 7, 2018. The concerts purpose was too commemorate Teto Kasane's 10th anniversary and was also performed near Teto day. On April 1, 2018, a live stream[1] with the plans for the the concert was broadcasted. On April 1, 2020, the live performance featuring the song 4/1 by monosenbei [2] for TETOFES was uploaded to the TETOFES YouTube channel. The video was later privated.

TETOFES is not organized by TWINDRILL, making the event unofficial.

Re:TETOFES is not organized by TWINDRILL, making the event unofficial.

Miku Symphony 2018-2019 was a 2-day live concert from Crypton Future Media and the sequel to the Miku Symphony 2016 and 2017 concerts. It was the second official Miku Symphony to feature all Crypton characters, the first being the 2017 Miku Symphony. It also celebrates the 10th anniversaries of Megurine Luka, Kasane Teto, and Snow Miku. Teto's section can be heard here.

Niconico Cho party was a annual concert hosted by the popular video-sharing website, Niconico from 2012-2018. They were then replaced with Niconico Chokaigi, which focuses more on celebrating the general users of the Niconico website. Every Niconico Cho Party has 3 parts. The VOCALOID/UTAU performances are always saved for part 3. The UTAUs featured were Teto Kasane and Ritsu Namine.

VOCAMERICA is a certified Fan-Produced VOCALOID concert event featuring Western VOCALOIDS and Vocal Synths. The project is the creation of Virginia-based VOCALOID producer EmpathP. The goal of VOCAMERICA is to educate and entertain fans of VOCALOID and other vocal synth products, with an emphasis on the more uncommon Western VOCALOIDs. The UTAUs featured in this concert are Aiko Kikyuune, Namida, Regalia and Wiki Hopper.

Without text and logo

Without logo and text

Happi jacket to be sold at event

The 1st trailer with Teto.

The 2nd trailer with Teto.

The 3rd trailer with Teto and Luka.

The 4th trailer with Teto, Luka, and Rin.

The 5th trailer with Teto, Luka, Rin, and MEIKO.

The 6th trailer with Teto, Luka, Rin, MEIKO, and Len. 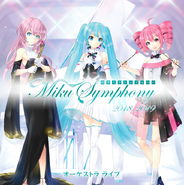 Cover art for the CD 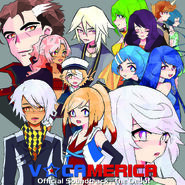 Retrieved from "https://utau.fandom.com/wiki/Musical_events?oldid=208274"
Community content is available under CC-BY-SA unless otherwise noted.