Miyuki's original VCV bank was released on January 3, 2017. This bank is monopitch with a very small range. This version of Miyuki has since been re-released three times to fix oto issues. This bank will likely never see another update.

On November 15, 2019, an updated powerscale KIRE voicebank was released for Miyuki. The bank is tripitch and gets more powerful the higher the pitch. The voicebank is CVVC with some English extras.

On December 29, 2019, a CVVC English bank was released for Miyuki. This bank matches her previous powerscale KIRE bank in terms of tone and pitch.

On January 7, 2020, an update for Miyuki's CVVC KIRE bank was released to celebrate her 3 year anniversary and fix some of her noted issues.

Miyuki is an alien from the planet Zecersonia, which is just outside the visible solar system, roughly what would be about an eighth of a lightyear from Pluto.

Zercersonia is considered to be a hub planet as many other species congregate to rest from their long travels.

Miyuki was sent to earth through the Zecersonia space cadet program and is the first Zecersonian to make contact with humans.

While she researches human life, she is the lead singer of a band called December Arrest, which plays metal music.

Miyuki has Aspergers Syndrome, and while it allows her to be highly skilled, intelligent, and creative, it sometimes impacts social interaction and emotional communication.

Miyuki has built a robot herself, Yuina.

Miyuki has a younger sister, Mieko, and Hanae and Hayate are their parents.

Dislikes: Hurting others, not being able to relate to others, lacking empathy

Miyuki's voicebanks are and will always be free for usage in the UTAU program.

It's unsure how many people have used Miyuki, but to date Miyuki is the most-used UTAU GraySlate has made.

All banks are in zip format. 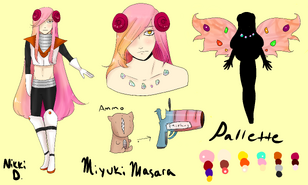 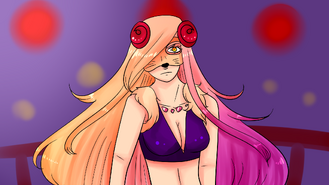 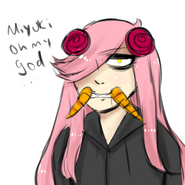 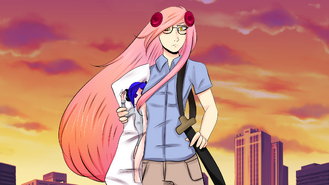 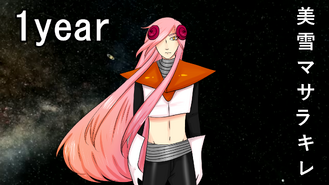 Retrieved from "https://utau.fandom.com/wiki/Miyuki_Masara?oldid=204113"
Community content is available under CC-BY-SA unless otherwise noted.