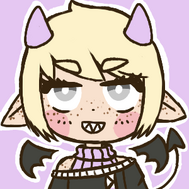 Otona ni naritakunaiyo.”
—"I don’t want to grow up."

Mischief Shiawasena (幸せな いたずら), looks like a sweet little girl. But she really is a brat who likes to annoy people. When Yume is around her she acts all sweet and adorable , but when Yume looks away she turns evil.

She is an alien girl, from an unknown planet. She came to earth as a child with her two older sisters. And learned to live among the humans, she likes to play pranks on the stupid earthlings.