Merodi Ongaku (メロディ 音楽) is a voicebank for the UTAU program.

Merodi is a regular citizen in R.W. She's a resident to Adventure Island in a small town by the sea called Town of Harmony. Merodi also has a weapon incase of threats. It's a clover axe. Similar to a battle axe but in the shape of a clover. It's still a work in progress.

Relationship with her Creator
Merodi doesn't call her creator "Master" since her creator herself doesn't like being called that. She thinks that Merodi is a slave or pet when being called "Master." Her creator prefers her name instead because that what she goes by. Her creator wants Merodi to be treated like a real person with feelings and rights.

Merodi is a bubbly and cheerful clover cyborg girl that once started out as an AI. She was given a body but it recorded plant DNA so she has plant cells inside her as well as animal cells. Her body is synthetic. She often worries a lot and rambles.

Merodi's current design is rather simple. Her hair has an extra strand of hair on the right side of her head. It's up in pigtails but in her append sweet design, her hair is down.

All the provisions below shall be applied to the voicebank, Merodi Ongaku.

Merodi of course was based off clovers. When I was really little, I collected many clovers because I thought they looked pretty. Especially the heart-shaped ones. Tiny flowers also grew in patches. When I created Merodi, I wanted to base her off of a childhood memory so clovers were one for me. So I researched more about clovers and had her color schemes be that of clovers. But I did have Merodi as just a regular OC before I even made her an UTAUloid. She used to wear a purple shirt with a white jacket and jeans. You can see her first design in her gallery. Merodi's stray hair on the right side of her head was something I based off myself. In many pictures of me, I always had a long strand of hair that was out of place. I coined that into Merodi's design.

I rerecorded Merodi 3 times. It was very time consuming, but she is worth it. When I was an UTAU n00b, I didn't know much about the program. I simply recorded Merodi without a mic. At the time, I thought she was great. But as I got more into UTAU and knew things, I listened back to Merodi's old voicebank and I finally opened my ears to hear how awfully low quality she sounded. When I got a new microphone, I rerecorded her. She sounded a lot better and somewhat good quality. I was pleased with such hard work I put into Merodi.

As I stated in Rizumu's fun facts list, I said Merodi is structured like him as well. Merodi too has two brains in one. One Humane side and one Mechanical side. The humane side is Merodi's behavior, moods, memories, interactions and speech like a normal human brain, thus Merodi functioning like a normal human. Her Mechanical side is her UTAUloid Data like her OTO samples, brainwaves to certain appends, and her technical information like pitch, gigabytes and such. One of her lungs, a part of her heart, and a few of her bones are mechanical while the rest of her organs are human.

If Merodi falls asleep while in her append Sweet outfit, the flowers in her hair and on her waist will close up. They will rebloom again when she is awake.
Merodi's number is 40 since she is my 40th OC.
Merodi requested Atir if he could program in Combat Mode for her too in order to help Rizumu.
Merodi is a worrier and often rambles.
Merodi has a strong grip so it's hard to pry her off somethings.

Merodi's flowers on her head in Append Sweet, aren't actual flowers. They are synthetic material that looks like and feels like real flowers. They have bioluminescent abilities so they glow in the dark. They are also powered by Merodi's vital signs.
The flowers help Merodi in Combat Mode with different scents. She can attract with a sweet smell, repel with a bad smell, similar to that of rafflesia flowers, or knock out with sleep spores or pollen. It's an effective defense mechanism.
Merodi also has a clover themed battle axe as her weapon and character item. She uses it when she feels threatened.
Merodi also has access to vine like wires that have flower buds on the end. Some can also have thorns on it. They are similar to Rizumu's USB attacks, but with Merodi, she can either poison a target with the vines by jabbing them or heal them. Merodi possesses red clover so she can heal allies with her spores or with the vines. 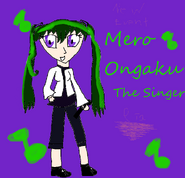