Mario Fuwa (不破マリオ (ふわまりお)) is a voicebank for the UTAU program.

The barista of a cat café, often seen working in that place. Contrary to popular belief, he is easily approachable, but he would rather keep to close friends. Because of this, many people perceive him as an aloof young man.

People who are close to Mario have commented about him acting like a big brother figure. In fact, he's also good with the children unlike Maria. That aside, he's also very blunt with what he says and does not give a care about whether one is offended.

Outside of his job, he often collaborates with his twin sister in building bots and other sorts of things. Not many know that he's an expert in mechanics, perhaps more knowledgeable than Maria. 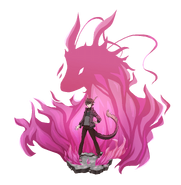