UTAU wiki
Register
Don't have an account?
Sign In
in: Pages with reference errors, Deceased creators, UTAU characters,
and 19 more

“Time passes and people do not change.”
—Catchphrase

Kyoranne Leo (狂乱音レオ(きょらんねれお)) is a voicebank for the UTAU program.

Leo was released in November 2011 with CV voicebank that was later updated to an ACT2.

In 2013 Leo's CV voicebank download was been disabled, the author was instead developing a Portuguese CVVC voicebank, which would support Japanese.

In 2011 he was said to be the successor king of "Aishiyama" a city in the top of a mountain. Leo hated VIPPERloids because he thought they deceived the people. His nationality was "Aishinese" (similar to Japanese) and his birthday was August 15, 1996.

In 2013 he became a cheerful, kind and adorable looking person. He likes to swing his tail on people's face. Being inconvenient is his way to show his affection to others. He can't keep secrets and this makes him really frustrated. He likes nature but also appreciates technological stuff. His life goal is to pronounce every consonant and vowel from IPA chart. He wants to discover the meaning of the words "socialism", "feminism" and "homophobia", but it seems like there's no one around to teach him. (A joke with the creator's opinions about all these things).

His type, code, and nationality became unknown but his species became "Felinus", a human with specific animal parts.

All the provisions below shall be applied to the voicebank, Kyoranne Leo. 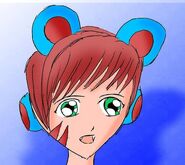 Current thumbnail 2013, by ~aeruko on dA