https://www.youtube.com/channel/UCuhWjFcc0pUAyKfiJzAjgAA
Kyotsune is an Utauloid by Kyo (Formally known as MikuMikuCheetah) This page contains all info regarding downloads and is a little archive on the utau itself.

He originated as Kyo's Blade and soul character. once she quit the game, she took Kyotsune over to Utauloid and gave him a fresh start as well as becoming the main Utau used for Kyo.

Kyotsune is a Cheetahloid, even if the cheetahloids are all outdated and out of commission now he is still made by the owner of them. He even still has his Cheetahloid number of "41" on his outfits to signify he is the 41st and final cheetahloid.

Kyotsune is known as the "Dimension hopper" of the Kyotroupe universe. Kyotroupe being a huge multiverse of stories and Oc's created by Kyo. Kyotsune is the main character of this universe and exists in all of the dimensions. He is down-to-earth and empathetic no matter who he meets. He is usually seen reading stories of great heroes or out making his own stories. He can't get his fantasies of heroism out of his head as he believes he can change the world if his life allows it and will always sacrifice anything to be the hero, not for the pride, but for knowing that the world is a little happier and can feel love rather then despair.

Kyotsune, given the fate no one else would ever know, born with 1/12 of a Demi-gods soul, would grow up in a quaint cottage in the middle of a forest on his home dimension. His reincarnated form only knowing the human world that surrounded him the only odd spectacle of his being was his odd red eyes. Cursed with a family who hated him, he was forced into suppression after primary school, as knowledge is the key to power. His parents waned the consequences of why their son was abnormal and feared for their lives. Kyotsune grew up to be humble and grateful regardless however, his secret sneaks to the library while everyone was at school or work would make him fall in love with story books. How Kyotsune wished to make peoples lives better like in these books. He would read and read for 8 hours a day gaining the knowledge his parents would take from him. It wasn't until he was 14 that he ran away without a trace, to join a school to learn martial arts and the channeling of ones inner mana. Mana travels though the soul however and not knowing his fate, he would be kicked out for not being able to do what was required. Hiss journey would take him all over his home world to discover how to fight for himself and learn to channel his mana though other teachings. After he succeeds in being a hero to some, an ancient mage who claims to be a former "dimension hopper" finds him and tells him his fate, He must leave his home dimension and travel to the center, there he can save the lives of everyone who resided in the dimensions as they were at sake.

Once Kyotsune travels to the center though means he did not understand, He was met with a Demi-God. He had mismatched fox ears and 2 tails, he showed Kyotsune the 12 dimensions flouting peacefully around the center of the multiverse. He mentions how the everything in this world is balanced by Yin and Yang, good and bad, black and white, However, The gods whom watch the dimensions no longer care about them and they are falling to far into the Yang Balance. He tells Kyo that this would cause the dimensions to no longer be able to sustain life and its all because of his soul. Before he was born, His soul was Yang based Demi-god, made by the gods to correct the previous Yin balance problems. He resided in the center until his fate of having his soul torn into 12, and sent to the 12 dimensions to add yang energy. Kyotsune does not know how he managed to be born with this soul fragment but he is the only one who can go obtain his other 11 fragments. Original Kyotsune stays at the center of the platform. he must supply blood to the waters surrounding the center to allow himself to exist in all 11 dimensions simotaiouly. What happens in these dimensions is part of Kyotroupe.

The dimension of the Cheetahloids, and where Kyotsune becomes a singer/Utauloid. The Cheetahloids is a group of Utaus by Kyo, also known in this universe as "Master" she keeps all of her cheetahloids in a massive mansion and gives them everything they need to survive and sing as Utaus. She has magical powers to revive dead people and all she has revived have paid her back by working as Utaus. Kyotsune enters this dimension and is immediately taken in by a clan of researchers who are against the Cheetahloids. They reveal Kyotsunes memories and give him a potion that will make him "find his soul no matter what the cost" Kyotsune accepts as he believes it will help him, however, this also completely alters his mental state. (I will finish this later lol)

Here are the current voicebanks for Kyotsune. All are Romaji base with Hiragana Alias.

Note: All VCV voicebanks are OTOed with Moresampler with minor tweaks from me. I am an adult with a job I don't have time to hand oto them.

I mainly use Moresampler as a resampler but I have made covers with Fresamp, resampler2, and wavtool2 as well.

Not Available (Cause bad) Will remake

The First VCV Voicebank. was used for a long time but has a few Recording issues and pronunciation issues. still good enough to use.

Flags: EF3B0C25M25YR2 (Idk why I used this one but I have been using it on him since I made his voicebank)

The first Append Voicebank for Kyotsune. Softer sound works well with quieter songs then the ACT 1 VCV. Recorded with old microphone so not as crisp as any voicebanks beyond this one.

Flags: I like to use this one B0C99H0F1P99E0 For songs with lower notes to make him crisp but I have also used him with basic flags or non at all.

The newest Voicebank for Kyotsune. Recorded with a crisper sounding microphone and better pronunciation and ascent.

Flags: None or Y0H0B0 (I found he sounds good without flags)

Kyo is a cosplayer its what she does for a living at the moment and she loves bringing her creations to life. Her cosplay page is @kyonatix 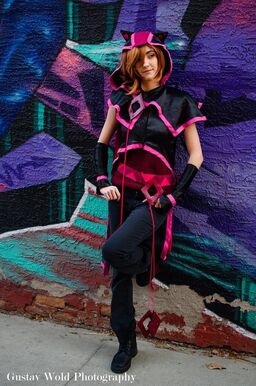 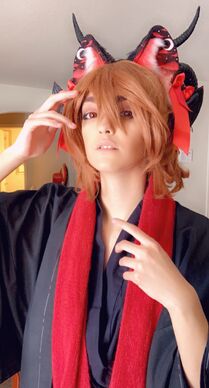 Kyo is very active with her OC Kyotsune She has cosplayed him many times including his Utau design. here is some pictures.

Retrieved from "https://utau.fandom.com/wiki/Kyotsune?oldid=214582"
Community content is available under CC-BY-SA unless otherwise noted.