INFORMATIONS IN THIS PAGE ARE NOT FINAL.

Kinose Syou (木ノ瀬ショウ(きのせ しょう)) is a voicebank for the UTAU program.

His informations below are incomplete (work in progress).

Since Syou belongs to Yko, the rest of his terms of use (except above) is same as Waiko and can be seen on Waiko's official site. 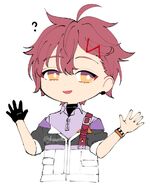 chibi syou from Yko's twitter for his mini design reveal