Kami is the first UTAU by EvxiKamine, and was therefore created through a lot of trial and error. They currently only have one voicebank avaliable, a CV bank that was recorded on a very basic microphone. The bank itself is low quality and hard to work with, so EvxiKamine plans to rerecord it soon. They also have plans to give Kami a VCV bank as well as an english bank, although that won't be happening anytime soon. Kami was created around mid-October 2020, but their official release date is 11th October 2020.

Kami was originally an oc before they became a voicebank. They are EvxiKamine's self-insert, a representation of what they want to be. Kami is quite androgynes, being non-binary and their actual sex being unknown. They are quite shy when you first meet them, but once you do, Kami will be one of the loudest in the group, making everyone laugh and being the one that makes the majority of the pervy jokes (with help from Lucinda). Kami is also bisexual, and can/will shout gay rights at the top of their lungs, threatening anyone who doesn't support lgbtq+. They mostly spend their time huddled behind a laptop screen, doing all sorts of different things as they are quite intelligent, but seem to have a huge lack of common sense, which annoys their friends quite a bit.

Kami's V1Star design is boyish and energetic, reflecting their personality. It consists of many layers, each in a camo-themed colour pallette. Kami's skin is pale with warm undertones, contrasting with their black hair, which is cut very short, apart from two chin-length side bangs, and a thick fringe covering the right side of their face. Their eyes are a dark purple, and their pupils are star-shaped, reflecting the voicebank name. They also have four peircings, two purple studs in their ears, and two silver studs in their lips, making snake bites. When it comes to clothes, Kami likes cool-looking yet comfortable, and everything must be cohesive. They wear a dark green crop with a swooping neckline, decorated with a disconnected 4-pointed star, and sometimes vertical stripes. Underneath it, Kami wears a grey long-sleeved undershirt with a similar neckline in the opposite direction. They also wear a pair of cargo shorts as well as knee-high boots, both in a matching brown colour. Lastly, Kami decorates their outfit with various purple leather straps consisting of a choker, belt, stomach straps, and boot covers in the same fabric. 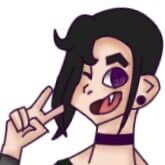 Kami's V1Star MMD Model
Add a photo to this gallery

This page was writien by EvxiKamine (Kami's creator/voice provider) and is still being updated. Please do not edit this page without permission from EvxiKamine.

Retrieved from "https://utau.fandom.com/wiki/Kami_Kumari?oldid=211879"
Community content is available under CC-BY-SA unless otherwise noted.