http://jaevocalproject.weebly.com/kena.html
kEna is a voicebank for the UTAU program. He is the sixth character released by JAE VOCAL PROJECT.

Preuss began producing kEna (a.k.a. "kEnaloid") in 2011 and never released him to the public. In 2016, he became aware of Xiao Meihua and the other upcoming characters of JAE UTAU PROJECT, then later supported the group. At some point, JAE UTAU PROJECT members sought out affiliates to collaborate with. Their first two affiliates were Tora☆Ouji with Pinku and Preuss with kEna. In 2018, Preuss was officially added as a new member of JAE UTAU PROJECT, thus making kEna a JAE character as well.

Examples of kEna's voicebank were made available primarily through Preuss's SoundCloud and YouTube accounts. He was officially released on May 15, 2020.[1]

kEna is a pansexual biracial Korean who is fairly good at most sports despite his laziness. He hopes to have good friends someday, and because of this, in addition to living with his constantly-irritated brother, he is somewhat dimwitted, but desires to be reliable for other people. As an extrovert, he enjoys social activities.

There are times where kEna may get a little ahead of himself and can be pushy or unhinged to the point of entering a Yandere state of mind. 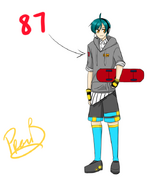 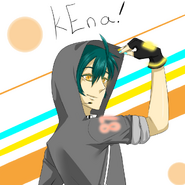 Retrieved from "https://utau.fandom.com/wiki/KEna?oldid=213122"
Community content is available under CC-BY-SA unless otherwise noted.