KATSU (カツ) is an UTAUloid created and voiced by Salem Wasteland. He was originally created in 2012 under the name Katsu Kou. In 2015, he was retired and not intended to have any future releases. However, in 2020, he was revived with a new voicebank and updated character design. Older voicebanks are not currently available for download.

A laidback guy making the most of his undeath. He woke up in a ditch with no idea how he got there or why. He remembers very little about his previous life, but has adjusted well to being a zombie. He ended up becoming a musician, and most of his fans assume that he's wearing a costume. 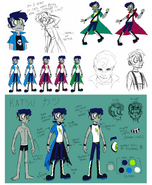 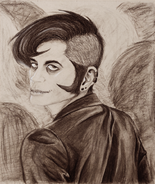