UTAU wiki
Register
Don't have an account?
Sign In
Advertisement
in: Male UTAUloid, Male voicers, Voicebanks from Canada,
and 9 more

Joule (ジュール) is a voicebank for the UTAU software.

His second voicebank, Joule CVVC, was released a little over a year later in late April, 2020.

Joule is a generally naive, reserved, and absent-minded person. He's rather emotional and impulsive, despite how shy he might come off upon first meeting him. However, he loves making new friends.

Joule is often in his own little world, usually caught either daydreaming or sleeping. Especially when he's not supposed to be. He's the type to stay up all night, typically making music and singing until morning comes. Which could explain his absent-mindedness from lack of sleep

(NOTE: this is just CJ's portrayal of Joule as a character. Headcanon's are welcome!)

All the provisions below shall be applied to the voicebank, Joule. For more details, please refer to the readme.txt provided in Joule's voicebank(s). 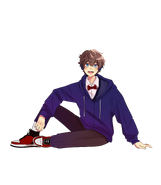