Okaru Itsuto (岡留イツト(おかるいつと)) is a voicebank for the UTAU program.

2 appends were released later, being "SAKEBI" and "SASAYAKI"

On 2/11/20, the links for Itsuto's 1.0/first voicebanks were removed; due to new voicebanks being in production.

Though the character Okaru Itsuto has established personality and characteristics, he does not need to adjust in this way for songs, art, videos, or the other media in which he's used.

Itsuto is generally very kind-hearted and nice to others but also has a cynical, arrogant side.

All the provisions below shall be applied to the voicebank Okaru Itsuto. 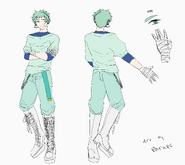