This article is a stub. You can help UTAU wiki by expanding it.

Ihiro is an UTAU created by SHINYUSHA/Windows 100% with the voice of Igarashi Hiromi (五十嵐 裕美), known for her roles as Anzu Futaba from THE iDOLM@STER series and Maribelle from Fire Emblem: Awakening. 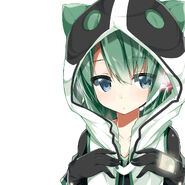 Retrieved from "https://utau.fandom.com/wiki/Ihiro?oldid=210518"
Community content is available under CC-BY-SA unless otherwise noted.