Hair color: Mango/Pumpkin Orange, Glossy
Headgear: Hiyane wears traditional headphones, while Tsurai wears a black eye patch. Nobody has ever seen his right eye.
Hairdo: Short pixie cut with bangs parted in three directions, with a small ahoge sticking up
Eye color: Orange.
Headphones: Hiyane's headphones are plain black with a microphone.
Outfits: Hiyane wears a black sleeveless and legless body suit with a turtle-neck, and orange arm warmers that are too long for her short arms. Tsurai sports baggy black pants, an orange, metal chest band and a black arm band. Neither of them wear shoes.
Nationality/Race: Presumeably Human.

Both of their voicebanks are distributed in one .zip file.

They are a pack, thus their label DUALoid.

The voicebanks are in separate folders, but distributed together.

There will be no VCV for their english library. 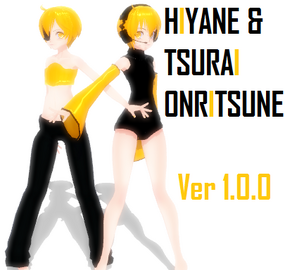 Hiyane & Tsurai Onritsune 1.0.0 Box
Add a photo to this gallery

THESE VOICEBANKS BELONG RIGHTFULLY TO TAFIRU-P, AS BOTH ARE MADE SOLELY FROM HER VOICE, AND THEY ARE HER CREATION

Specific To Tsurai: Since his first song was SPICE!, I can't really object to him being used in "THOSE" kind of songs... so... knock yourselves out >.> (I dunno he sounded cool singing it) -TAFIRU-P

Specific To Hiyane: The same stated above applies to Hiyane as well, even though she has done nothing wrong (unlike Tsurai, you bad, bad boy.) BUT THERE'S A CATCH! ... ABSOLUTELY, POSITIVELY, EXTRIMEAPOSLY NO PRODUCTIONS OF "WASH MY BLOOD." FOR EITHER OF THEM (LOL "Extrimeaposly" i made up a word XD)

Retrieved from "https://utau.fandom.com/wiki/Hiyane_%26_Tsurai_Onritsune?oldid=201517"
Community content is available under CC-BY-SA unless otherwise noted.