UTAU wiki
Register
Don't have an account?
Sign In
Advertisement
in: UTAU characters, Voicebanks from USA, Work in Progress,
and 14 more

Zenne Hito (全音ヒト) (ぜんねひと)) is a voicebank for the UTAU program.

Hito Zenne started as a voiceless character when a fanloid turned into an UTAU, Then back into a fanloid. A user called ZetsuneProjectContes originally made the design, while UTAUDoge/ Hito-P came up with the name. Hito was generally a gift for Hito-P, while the fanloid's voice didn't fit them as much as Hito. His design was made in MikuMikuDance. Hito's currently in the Zetsune Project, which is a project that gives Fanloids voices and UTAU's popularity. Their first appearance was under the name “Tendane Haruto”, which meant “tender sound”. But, Hito-P thought the name was too long. Hito later gained a new name “Hikune Taiki”, which meant “low sound.” The same thing happened with Haruto, the name was too long. Later, Hito-P found an even better name, which is what Hito currently has now. In 2021, he was drawn into a furloid. Hito was later drawn back into a human. Later that same year, Hito's furry design was reused.

Hito Zenne is a robot UTAU created in 2019. Their voice can be described as masculine, strong, and nasally. Their personality’s meant to be caring and sweet, but a little annoying at times. Along with Doreiku Ocharakeru, he robbed a Burger King, then set it on fire. Due to Hito yelling through a megaphone most of the time, he can often be seen with a sore throat. He drinks tea to sooth the soreness. Hito lives with his roommate, Roru. Hito discovered he can shapeshift into an anthropomorphic animal, he just doesn't know how to control it, yet. Hito refers to himself as a demiboy

Additionally, You may not use Hito for hate speech/ slander of any kind, anything political, homophobic, or anything against UTAUs TOS.

You may NOT use Hito for Ievan Polkka covers, or any song of the sort.

You may NOT pitch Hito for any existing character in any fandom. The only exceptions are Hito based derivatives.

You may NOT credit Hito as your own, please credit Hito-P when using them. 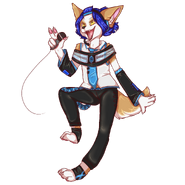