On January 7, 2017, the first version of Hinaya was released.  He was a monopitch CV Japanese bank.  This bank had many issues, ranging from samples being too loud and muffled, making Hinaya barely understandable.  This bank is now retired and has ceased distribution.

On August 24, 2019, a new version of Hinaya was released, another CV bank.  While this bank was somewhat of an improvement, the bank had hard consonants, muffled recordings, and a subpar oto.  This bank is now retired and has ceased distribution.

On November 23, 2019, Hinaya was updated to his current bank.  He is now a triptich CVVC Japanese bank.  His tone is much clearer and he is easier to understand.

On September 9, 2020, an update fixing Hinaya's oto issues was released.

Hinaya was born to an angel father and a demon mother.  While his parents are outgoing and boisterous, Hinaya has always been reserved and not emotive.  He was raised in a wealthy household, but was taught to be humble, and thus became generous and polite.  Hinaya requested to venture into the human world,  and although his parents were more than happy to supply him with money, he decided to work at a maid cafe to earn his own money.  He has met many people, and talks to his parents frequently about the encounters he has with others.  He has had many romantic partners that he treats well, and has a good group of close friends.  He spends his time either working or exploring the world of humans.  He loves Lolita fashion (which often means he crossdresses) and collecting human vintage items.  His favorite of these in his collection is a ceramic, jeweled elephant.  Hinaya often gets mistaken for being a girl due to his appearance and how he dresses, but he doesn't mind correcting others when they make the wrong assumption.

Hinaya's voicebank is and will always be free for usage in the UTAU program.

It's unsure how many people have used Hinaya, but it's hoped that more people use him.

Hinaya's bank is in zip format. 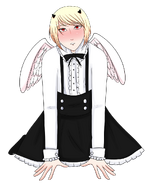 Retrieved from "https://utau.fandom.com/wiki/Hinaya_Nurune?oldid=213249"
Community content is available under CC-BY-SA unless otherwise noted.