Meiji Gahata was a combination of a fashion model and singer, currently in collaboration with the Lifulu shop. She was based around a theme of magic and fantasy, and had multiple multipitch VCV voicebanks. Despite being inactive, She is still one of the more popular voicebanks and is known for being high quality.

“A bit of a dreamer, yearns to be a heroine.”
—Meiji Gahata's personality

It could be inferred from this that Meiji's name can be translated to "Banner/Flag Sound of the Mage/Witch".

Two years after Meiji's release, Saccu began releasing append-like voicebanks themed around fairy tales and magic. These voicebanks cover a considerable amount of singing styles and genres and are considered the successors to the original three voicebanks. All of her voice banks can be downloaded on her official voicebank download page. These voicebanks were released on March 8, 2014.

Themed around "Mischief of the fairy". A sweet voicebank. Recorded in 4 pitches. Originally intended to be a whisper/soft voicebank. Discontinued.

A set of the above three voicebanks. Discontinued.

An official Japanese usage clause was located on her official website. A rough and incomplete English translation is as follows:

On July 2014, 佐々木渉 (Sasaki Wataru, also known as Wat), Crypton Future Media VOCALOID developer and creator of Hatsune Miku, announced Meiji would be used in the development of Megurine Luka V4X as a template to bring out the unique qualities of Luka's voice provider, 浅川悠 (Asakawa Yu). [3] It is also rumored that she inspired the development of a growl feature in Vocaloid 4; however, as of writing, the supposed interview that this was mentioned in has not been found. 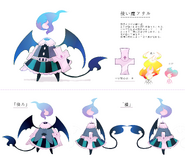 Second Anniversary Art
Add a photo to this gallery

Retrieved from "https://utau.fandom.com/wiki/Gahata_Meiji?oldid=206757"
Community content is available under CC-BY-SA unless otherwise noted.