When you do something catastrophically wrong with an UTAUloid's voice, the result is a Fail UTAUloid. Whether by rendering or creation itself, failures are not far away from the UTAU scene. While the idea of fail UTAUloids was inspired from Voyakiloids, it was xCloudyx and Mangachibehfox of deviantART.com who expounded on this idea. xCloudyx mentioned making a failure counterpart of Kasane Teto, and thus sparked the idea of making them. This idea has since been adopted by the community and failure counterparts of some UTAUloids have been created, often becoming officially adopted characters.

To be considered a Fail UTAU, it must have (to an extent) undesirable voice rendering and voice properties unbecoming of a proper voicebank. This does not include UTAU Usage Policy violations, which Fail UTAUloids still must adhere to.

Idate is the fail version of Ruko Yokune. As a fail, she is an off-key Ruko, sometimes a pitch higher or lower. Her age is not determined, but she is portrayed as older, since she tends to get drunk. Her character item is a metal clothing hanger. For details, see Failed UTAUloids - Project_Utaenaid.

Takiko is the fail of Teto Kasane. She is best friends with Idate, although she gets rather bothered when Idate gets drunk, since she tends to snuggle Takiko like a teddy bear and sometimes smothers her. She gets angry when people call her a fail, and is considered yandere. For further details, see Failed UTAUloids - Project_Utaenaid.

The failed version of Momo Momone. She refuses to do what she is told to do because she looks like a maid. Her favorite quote is "I cant clean those dirty balls...". She is very shy and rather quiet. Her friends often forget if she is there with them because she rarely talks. Her name, Kiui, means 'kiwi', a fruit known to be sour. It is in contrast to Momo's name, meaning 'peach', since peaches are known to be sweet. For details, see Failed UTAUloids - Project_Utaenaid.

The failed version of Aline Enbukyoku; she still doesn't have any character design, but she's seen as fatter, with shoulder-length, wavy and fringeless grayish lilac hair (which she can tie or not), bandaged nerdy glasses, bloodred eyes, and horrible taste in clothes (she likes to use a white with purple collar and sleeves unisex T-shirt with a blue broken heart, blue high-waist baggy pants and teal flipflops); it's a bit of self-joke on the author, as she dresses almost that way (except for the glasses). Debune means "fat sound" (although "debu" is usually a pretty harsh way to call someone fat). She's a creepy stalker, a coward, suffers from severe depression, and is said that she's a hikikkomori as well. Has an unhealthy and stalkerish obsession for Tekuno Hirane, the failure version of Gakupo, and her favorite pasttime is to troll people on internet, specially other UTAUloids and furries. Her character item is a kitchen knife (which she menaces to use in other people, but never manages to do so). A "singing" voice can be done through octaves below C4, and a configuration of g-30 or more.

The failed version of Namine Ritsu; Like Ritsu, he is a crossdresser. In contrast, he is very friendly and a bit cheerful for a fail. He sees himself as father to the other failures and will baby them at times. For more detailed information, see Failed UTAUloids - Project_Utaenaid.

The failed version of Kikyuune Aiko, Anzu's origin spawned first from a failed attempt at Macloid. Aiko's fail was given a design by MangaChibehFox on deviantart, and it can be viewed here. She is supposed to represent a broken version of Aiko, resulting from data loss (when Aiko's voicer, Myst, dropped her computer and lost all windows programs in late 2009). Her voice results from using non-UTAU sound editing programs, such as Audacity or Garageband, to raise or lower the pitch of Aiko's samples for different notes but at the same time chipmunk or demonify the voice. In UTAU, the same effect can be obtained by removing the formant filter on all notes.

The fail version of Wakana Ayane. As the failure of Wakana, she has a cute personality, unlike the original. A video of her can be seen here . Even though she can't sing it right but she messed up some parts of the song. She is very not confident person, clumsy at some times, and depressed when no one is helping her. She, have her own love interest named Hakuo Yowane. She is strong-willed girl but her shyness always get in her way when she ever did her best to comes up with something. By keeping her only item which it was a huge hammer on her side will make her feel safe. When she is with Wakana, she having difficulties to do much of her work and later ends up failing because of it.

Iroko is the failed version of Uta Utane aka. Defoko.She's likes to sing though she's a fail. She wears a ponytail. Her clothes are a sailor hat,and an uniform similar to Defoko's. Her colour scheme is blue and her model number is 412 (from the HTML error) imprinted on her hat. She has a background story explaining that she was a robotic, test model of Defoko, who fell from a stage, breaking one of her robotic ears. Since this accident, Iroko's voice is deeper than Defoko's, due to a software bug from the the loss of her ear. You can get her voice with adding g+12 flag to Defoko's voice.

The fail version of Shizu Sogone. She tends to be either extremely depressed or extremely drunk. Image is here . Her voice comes from Shizu being out of key, with messed up oto.ini, and/or badly stalled.

The fail version of Kii Nane. Originally named Kikkii Nane, she is Kii's 14yo cousin. Kikki wears a grey and blue version of Kii's outfit (without a scarf), has grey hair with a smaller ahoge than Kii, has red eyes, and her headphones are placed incorrectly on her head. Kikki sleeps alot, and when she is awake, her speech pattern is slow and stuttery. Kikki's surname, Nemurine, means "sleeping sound", for an obvious reason. Originally, Kikki was set at g+10, but hideki782, Kikki's creator, now recommends that Kikki be set at H25x99g+10 for a more robotic sound. Kikki has no personality, and often stares at people sleepily. She usually wakes up to take care of her basic needs (food, bath etc), then will fall asleep again, unless someone makes conversation with her. Her voice does not jump in pitch when speaking, and is almost monotone, save for the occasional stutter.

The fail version of Hantai Shaine. She wears a short blue gown, a formal one, and under it a snug pair of pink pajama pants and slippers. Her slippers look like a cozier version of Hantai shoes. She is usually depicted as chewing bubble gum. Her ahoge is quite larger than her perfect counterparts, and drapes into her eyes. Her headphones are silver with blue stars on the phones. The headset sits around her neck, and one of the phones is cracked at the middle of the star, missing a few pieces. Her name means 'Following Boredom', because instead of working for what she wants, she just follows along boredly till it comes to her. She doesn't generally do much but sit around and wait for something exciting. She does sing, and finds nothing wrong with her voice, but when no one applauds she can get steaming mad. She likes to poke at JIROU , finding him too innocent. It's a known fact that Ika used to have grey hair, but found that blondes were more appealing. She put the blonde in, and it got really, really light to the point where it became a white shade. She's a lazy, egocentric, and easily irritated girl. 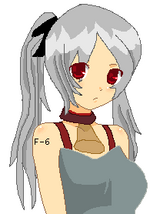 Nai Doll is the failed version of Nala Doll. She has Nala's gown, but it is grey. Her hair is darker grey, with Miku Hatsune-type pigtails. They are tied by black ribbons. Her eyes are red. She rarely shows any emotion besides the blank look. She nods and shakes her head to answer simple questions, and when she speaks its usually very low and grumbled. Her name is literally "Dead Doll". She's supposed to be a sweet girl, but the fact that she's a failure dropped her confidence ten-fold. She has a huge, rusty cow bell as her character item. She wears it around her neck, and you can sometimes see red marks where it hung. She has an obsession over puppets - more specifically marionettes and the like - which is also considered another character item. She's a bit taller than Nala. Her ears are long, thick, metal bars that jut out from her head. They have shining red lines coursing through them. Her songs are being released soon.

It's the 1st version of the UTAUloid Exile Waf. It has the same appearance as ACT 2, only that he doesn't have earbuds on his ears, and he is naked. It's considered a Fail UTAUloid because of it's bad Japanese pronunciation, horrible voice, and exaggeratedly robotic voice. Only 1 song is available of Exile Waf ACT 1, which is PonPonPon. It can be found here: PonPonPon ACT 2 has notable changes as clearer voice, better pronunciation, and less robotic voice.

Ayano Act1 is the failed first version of AYANO. It is the same appearance as Act2. It is considered a fail because of the samples being way to short and/or some quiet, some loud. No covers with her are released, but her failed voicebank is up for download via Rin-Chan-Vocaloid02's journal entry on DeviantART. Act 2 is a better smoother version and currently still being produced. AYANOAct1's only cover, non posted any where, is of Let it Go, which the producer of her sent to her friends. Ayano is a human, soft, tender voice and is currently getting a ENGLISH voice.

Gentei Boisu is a Failoid concoction made by mixing one utau's frequency and oto.ini files with another's wav files. These two UTAUs in question are Yumine Kisa (frq and oto.ini donor) and Dazenloid (Wav file donor). She is considered a failoid because of her scratchy, echoed, roboloid tone, which can sing in a higher or lower pitch than anticipated. She has her own art, and her "Outer Science" cover can be found here. Download links are linked to the wiki page for her on here. She was originally going to be a Chinese UTAULOID, with a synthesized harmony with a high pitch, but the creator's 2DS refused to transfer the files onto computer, and, once the creator managed to get the audio to work, the clips had no sound, or, if on another program, had a watermark, but for audio.

The failed vcv version of Kaarorin Kitto, she had sounds that are choppy and mixed incorrectly. A new voicebank is being made.... Cayrolin has a bad spray tan, vomit colored eyes, and strange hair. She has not uploaded any covers but the voicebank will be available for download.

Retrieved from "https://utau.fandom.com/wiki/Fail_UTAUloids?oldid=199154"
Community content is available under CC-BY-SA unless otherwise noted.