Eve Eden (イヴ イデン) is a voicebank for the UTAU program.

Eve was created in late 2014th as an UTAU voicebank named Yami Shiro. Later she was frozen as a project and later, in the middle of 2019, work on her was continued.

She is android. Bio-robot. Eve is calm and tender most of the time, but despite her kindness, she is selective in people. She was the first android created by 'creator' and has her limitation because of that, for example, she needs 'fuel' to work properly, in her case, her 'fuel' are sweets, any kind of them, other food is just for fun.

Note: it's better to contact Eve's owner for getting any of these voicebanks.

All the provisions below shall be applied to the voicebank, Eve Eden. 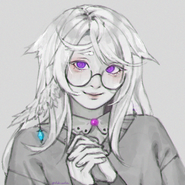 Retrieved from "https://utau.fandom.com/wiki/Eve_Eden?oldid=202137"
Community content is available under CC-BY-SA unless otherwise noted.