Hair: Dark brown, long and tied on a pony tail with a golden piece.

Headgear: Black headset with red mic on the left side. Added with light lines arround the middle area

Dress: According to the song he may use a different outfit, but his main is a set of jeans, black leather with light lines and golden straps vest, and red short chest heigh, long sleeved jacket with wool neck that also has light lines and his two initials on the left side of the chest.

Physique: Pretty girlish but with some muscles on his body, tonified, not beefy. In previous versions he had a set of wings but they were cut from ver. 3.0 to allow him major movement and also a better performance and display.

Draco Ryumaru in an older design. Made for his feature song "Beelzebub's Party" 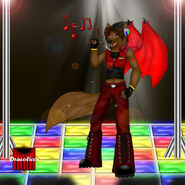 Draco in older design. Crimson leather vest and pants, boots and crimson and silver belt. A tanktop below the vest. Te headset also is different.

Draco Ryumaru (old design) together with Dave Okatsune (old desgin) on a concert. 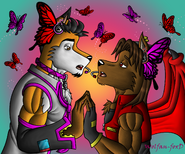 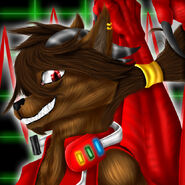 Draco Ryumaru on his new ver 3.0 outfit! Offering a helping hand to the editors!
Add a photo to this gallery

Retrieved from "https://utau.fandom.com/wiki/Draco_Ryumaru?oldid=177393"
Community content is available under CC-BY-SA unless otherwise noted.