In June 2013, an update was made, Dong Fang Zhi Zi V2.0, where she was given an updated Chinese voicebank and a CV Japanese voicebank. As of August 2013 [5], the link has stopped working.

Dong Fang Zhi Zi has also been given a NIAONiao voicebank.[1]

During May 5, 2017, on the official NIAONiao website, a page for Zhi Zi was made and according to the website the link was dead, however fans have notice that the link leads to a download for UTAU voicebanks that were uploaded on December 27, 2016[6] a official bilibili was made for these voicebanks, however its unknown who made the voicebanks

Her original voicebank was a monopitch single sound bank, with Mandarin sounds only, though she can sing in Japanese with proper aliasing and configuration. There are reviews that her voice is difficult to work with due to her voice provider not using a microphone that allowed for clear recording

By the time of Dong Fang Zhi Zi V2.0, where she was given an updated Chinese voicebank and a CV Japanese voicebank users reported that the oto.ini wasn't good quality however was better quality than her first voicebank.

On December 27, 2016, a download for her "Blossom" voicebanks was uploaded and it comes in 4 voicebanks, 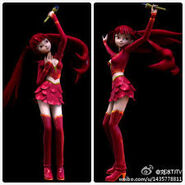 Retrieved from "https://utau.fandom.com/wiki/Dong_Fang_Zhi_Zi?oldid=194443"
Community content is available under CC-BY-SA unless otherwise noted.