https://utau.fandom.com
Daryl "Murica Jones" is an English voicebank for the UTAU program.

On February 15, 2019, an update of Daryl was released to fix his oto issues and release him on YouTube.

On July 4, 2019, to commemorate his birthday, Daryl's original bank was updated for the last time.

On July 22, 2020, Daryl's FREEDOM bank was released. This bank improved upon everything from the first and the recording and aliasing method completely changed.

Daryl began as a joke voicebank, an experiment of recording a very stereotypical Texas accent.  Daryl's tone and even some phonemes are an attempt to replicate Southern Drawl.  Since his inception, his character has developed beyond simple stereotypes.

Daryl Jones was born on the fourth of July.  He has always been patriotic and has great love for his country.  He developed a love for music and began learning guitar at a young age.  He left home rather young, at only 18, to pursue a career in music in the heart of Dallas, Texas.  He lived very modestly all things considered, only really desiring the basics and being very frugal about spending money.  As he began the process of creating songs to send to radio stations, he met Richard.  Richard and Daryl would become close extremely quickly, and eventually would fall in love.  Daryl is comparatively much more open and extroverted than the quiet and reserved Richard.  Because of Richard's encouragement, Daryl would keep producing songs and would see his career take off seemingly overnight.  Daryl, although a very successful country music star, faces controversy for being gay in an industry and listener base that is intolerant.  Daryl unabashedly wears his pride on his sleeve, and has been known to completely walk away from recording companies and deals that won't support his marginalized colleagues.  When he isn't doing his main music work, he enjoys monster truck racing and spoiling Richard.  Daryl has connections that allow him to keep a bald eagle as a pet, as ownership of a bald eagle is normally a felony in the United States.  The eagle's full name is Uncle Freedom Sam.  Daryl lives together with Richard and of course, Uncle Freedom Sam.

All the provisions below shall be applied to the voicebank, Daryl "Murica" Jones.

Daryl's voicebank is and will always be free for usage in the UTAU program.

It's unsure how many people have used Daryl, but it's hoped that more people use him. The reception of Daryl has been overwhelmingly positive. 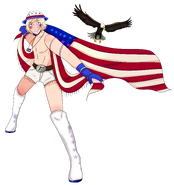 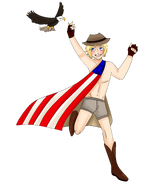 Country Roads Thumbnail by GraySlate
Add a photo to this gallery

Retrieved from "https://utau.fandom.com/wiki/Daryl_%22Murica%22_Jones?oldid=213239"
Community content is available under CC-BY-SA unless otherwise noted.