UTAU wiki
Register
Don't have an account?
Sign In
Advertisement
in: Voicebanks from France, UTAUloids, Androgynous UTAUloid,
and 3 more

Cina (シナ) is a voicebank for the UTAU program. He is also a major character of "REFLET PROJECT". As a non-human gem lifeform, they are sexless. He consider himself as a man, and use He/Him pronouns.

Cina is in the canon of R.Project's story the child of the Goddess of the Earth, Gaïa. He have a little sibling name Aquamarine (who's also a Utauloid).

He works as a scientist specializing in robotics. He's somehow popular in his hometown, some people see him as a cool guy, some as a crazy scientist. (His close friends know that he is a bit of both). Contrary to his little sibling, Cina is a reserved person. It's not that He dislike people, he just enjoy calm.

He is a work addict, spend almost all of his freetime to experiments. Beside he's love for science and robotic, he's very fond of music. Aquamarine introduce him to Phylli's music band, and since then he became one of their vocalist.

Morganite is a alternative version of Cina using his CV voicebank created by SoraFan810. 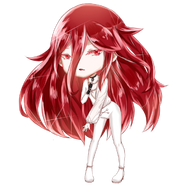