Blu Gold is a voicebank for the UTAU program.

Blu comes from a race of aliens from another galaxy. They are mysterious, as they don't display much emotion. They tend to stutter when they speak, giving off a nervous vibe. 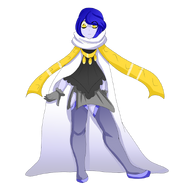 Retrieved from "https://utau.fandom.com/wiki/Blu_Gold?oldid=213664"
Community content is available under CC-BY-SA unless otherwise noted.