“Singing with a robot-like voice in a free software feels you with BRAVERY.”
—Aquamarine (probably)

Aquamarine (アクアマリン) is a voicebank for the UTAU program. They are also a major character of "REFLET PROJECT". As a non-human gem lifeform, they are sexless. They are non-binary and use They/them.

Aquamarine is in the canon of R.Project's story the child of the Goddess of the Earth, Gaïa. They have a big brother name Cina (who's also a Utauloid).

Aquamarine [CV] have a different design and story who belongs to SoraFan810. These two Aqua have the same voice provider but aren't the same character. 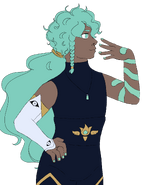 Retrieved from "https://utau.fandom.com/wiki/Aquamarine?oldid=213958"
Community content is available under CC-BY-SA unless otherwise noted.