Little information is available on this UTAU. Since October 2014, it has been distributed as a VCV (Continuous Sound) monopitch voicebank. The character was born from a : "Let's gather five artists, propose a theme they like and make a character with each of them!"

His site defines him with a "grandfatherly" personality, and nicopedia refers to him as someone traditional. It could be assumed that he is a calm and caring character.

The character has long, light silver-white hair tied in a knot and two red horns coming out of his head. His eyes are a very light olive color. He wears a costume similar to "Yamabushi". 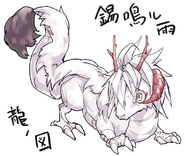