Amai was originally created and voiced by his original owner morrysillusion. His ownership was transferred to SoraFan810 on March 27, 2020, where he received a new voice.

Amai is a monster from another world whose personality is essentially that of a spoiled rich kid. He's very snobby and condescending towards people and believes that he is better than everyone else.

Despite being a monster, he isn't very malicious or threatening towards people. He also has a human form, and in this form, his skin becomes a light brown color, his tail disappears, his ears become human, and he wears pink and yellow shoes with light blue shoelaces.

Amai's voicebank is a young sounding male voice. It is a Japanese CV voicebank that is romaji encoded, but is unaliased. He also has an MMD model that was made by Suminochan.

Original design, drawn in 2019. Can be optional to use 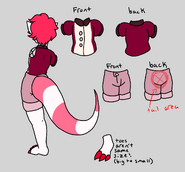 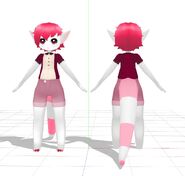